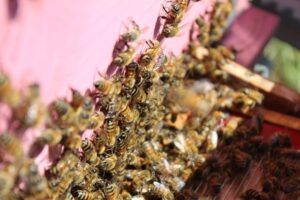 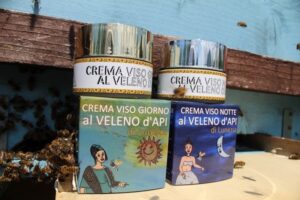 As the largest organ in the human body, the skin undergoes an aging process like all the other organs in the body. Both intrinsic and extrinsic factors contribute to skin aging via collagen alteration. While chronic sun exposure, especially to ultraviolet (UV) rays, is the dominant extrinsic aging cause, the passage of time is the main intrinsic aging factor. The characteristics of the aging process are the result of epidermal thinning, atypia of keratinocytes, and collagen degradation, which can be attributed to increased synthesis of collagenase.1 Reduction of collagen production subsequently causes the decrease of skin elasticity and collapse of fibroblasts to result in wrinkle formation.

Cosmeceuticals are skin-care products that cater for both cosmetics and drugs.2 The desire for the improvement of aging skin has resulted in a large volume of products to improve the appearance of skin. Many ingredients have been added to these cosmeceuticals, and honeybee venom is one of them. Since the beginning of the twentieth century, multiple therapeutic applications for bee venom have been developed for certain disorders. Given the anti-inflammatory and analgesic properties of bee venom, various forms of bee-venom therapy have been used for rheumatoid arthritis and multiple sclerosis.3 This traditional medicine has also been used for other diseases like cancer4 and even for Parkinson’s disease.5 In addition, purified bee venom from Apis mellifera has been applied for skin conditions due to its antimicrobial properties.6

All experimental procedures used in the present study were approved by the Animal Care and Use Committee at the National Academy of Agricultural Science (NAAS), South Korea. Experimental colonies of natural honey bees (A. mellifera L.) used in this study were maintained at NAAS. Bee venom was collected with a bee-venom collector (Chungjin Biotech, Ansan, South Korea) in a sterile manner under strict laboratory conditions. In brief, the bee-venom collector was placed on the hive, and the bees were given enough electric shocks to cause them to sting a glass plate, from which dried bee venom was later scraped off. The collected venom was diluted in cold sterile water and then centrifuged at 10,000 g for 5 minutes at 4°C to discard residues from the supernatant. Purified bee venom was lyophilized by freeze-drying and refrigerated at 4°C for later use. Honeybee-venom serum was manufactured by using the approved materials of the International Cosmetic Ingredient Dictionary and formulated by following the instructions of the manufacturer, Dong Sung Pharmaceutical Co Ltd (Seoul, South Korea). For use in this study, bee-venom facial serum at a concentration of 0.006% bee venom was formulated.

The clinical study was performed in accordance with the International Committee on Harmonisation Good Clinical Practice guidelines and the revised version of the Declaration of Helsinki. The trial protocol was approved by the institutional review board of Kyung Hee University Skin Biotechnology Center. Twenty-two generally healthy South Korean women aged between 30 and 49 years were selected from volunteers. All procedures involved in the study were explained in detail to volunteers, and written informed consent was obtained prior to entering the study. All subjects fulfilled inclusion criteria for periorbital wrinkles (global photodamage score 1–6),7 confirmed by a dermatologist’s physical examination. Ten patients had mild photodamage (grades 2–3 on a 0–7 scale), and 12 had moderate photo-damage (grades 4–5 on a 0–7 scale). For skin types, eight had dry skin, four normal skin, and ten a combination (dry, normal, and oily). Subjects with concomitant treatments, a propensity for pregnancy, use of anti-inflammatory drugs or immunosuppressants, chronic sickness, and wrinkle removal or peeling procedures within the last 6 months were excluded. Subjects were instructed to apply the treatment serum (Table 1) on their entire facial skin at an amount of 4 mL twice daily in the morning and evening for 12 weeks. Clinical evaluations were made at weeks 0 (baseline), 4, 8, and 12. A dermatologist’s visual assessment, photographs, and image analysis of replicas were used to evaluate changes in skin wrinkles. Replicas of wrinkles in the left and right periorbital areas were acquired.

For a couple of hours preceding the clinic visit at weeks 0, 4, 8, and 12, subjects were instructed not to make any changes to their daily skin-care routine or expose their face to intense sunlight. Upon arrival, subjects washed their face with a mild or soapless nonmedicated cleanser and waited 20 minutes at a constant temperature (22°C±2°C) and humidity (50%±5%) before assessment by a dermatologist. Subjects’ periorbital wrinkles were evaluated with a double-blind test by two dermatologists based on a wrinkle grade (Table 2), which was developed by the Korea Food and Drug Administration.8 Subjects’ periorbital wrinkles were classified into ten grades. Medical photographs of periorbital wrinkles were taken at each visit by a Facial Stage DM-3 (Schott Moritex Corporation, Asaka, Japan).

Subject self-assessments via questionnaire were made at weeks 4, 8, and 12. Subjects rated their facial skin condition and the product’s efficacy on a 4-point scale (strongly agree, agree, disagree, and strongly disagree). Changes in total wrinkle area analyzed by the Visioline VL 650 after 12 weeks of treatment with bee-venom serum. Changes in total wrinkle count analyzed by the Visioline VL 650 after 12 weeks of treatment with bee-venom serum. Changes in average wrinkle depth analyzed by the Visioline VL 650 12 weeks of treatment with bee-venom serum. Open in a separate window
Figure 4

Representative facial images and replicas of wrinkle improvement in the crow’s feet area at baseline and after 4, 8, and 12 weeks of bee-venom serum use. Subject self-assessment of bee-venom serum attributes after 4, 8, and 12 weeks’ treatment.

The main aim of the present study was to evaluate the clinical effects of bee-venom serum by measuring clinical wrinkles objectively with a device that converts wrinkle roughness to numerical values. This is the first clinical study to determine the effects of bee venom-containing cosmetics on facial wrinkles in human skin. In this research, we found that bee-venom serum treatment clinically improved facial wrinkles by decreasing total wrinkle area, total wrinkle count, and average wrinkle depth.

The mechanism by which bee-venom serum exerts its antiwrinkle effects is unknown. The therapeutic action of bee venom has been studied mostly for skin-related symptoms, at least by our group of researchers. When skin bacteria were incubated with bee venom, a bacteriostatic action of bee venom was demonstrated, which was further supported by its anti-inflammatory activity against skin bacteria through suppression of the secretion of proinflammatory cytokines.9 This in vitro action of an antimicrobial property in bee-venom study was further translated into an in vivo study of human subjects with acne vulgaris.6 Repeated exposure to UV irradiation induces an elevated secretion of matrix-degrading enzymes called matrix metalloproteinases (MMPs). With human dermal fibroblasts, bee venom markedly reduced UV-induced MMP protein levels compared with those of UV-irradiated controls.10 This was attributed to the presence of an antimelanogenic property of bee venom by inhibiting tyrosinase-related proteins.11 Similarly, dietary Aloe vera supplementation improved facial wrinkles by causing a significant decrease in MMP-1 messenger RNA levels.12 When wounded mice were treated topically with bee venom, increased collagen protein synthesis was demonstrated,13 which might be related to increased proliferation and migration of human epidermal keratinocytes.14 Bee venom as a cosmetic ingredient may be useful as a topical agent for promoting skin regeneration or a treatment of certain epidermal conditions. Topical application of bee venom can be well tolerated in the human skin, because it has exhibited no dermal irritation potential in animal studies.15

The main aim of this study was to evaluate the clinical effects of bee-venom serum. We analyzed images using replicas and the Visioline device, which is an objective technique to reproduce changes in photodamaged skin. The image analysis using replicas was performed at week 12, when significant differences in total wrinkle area, total wrinkle count, and average wrinkle depth were observed. This analysis correlated well with the clinical findings. Moreover, a significant difference in visual grade was observed after 8 weeks with bee-venom serum, indicating the faster effect of bee-venom serum on wrinkle improvement.

Our findings suggest that bee venom plays an important role in the improvement of skin wrinkles, and it is used in the cosmetics industry as an antiwrinkle agent. Bee-venom serum provided greater efficacy in terms of total wrinkle area, total wrinkle count, and average wrinkle depth in subjects with photodamaged skin. Long-term treatment with bee venom-containing cosmetics could be safe, because the irritation potential of bee venom is negligible.

This work was supported by a grant from the support of Cooperative Research Program for Agriculture Science and Technology Development (project PJ01132503), Rural Development Administration, Republic of Korea.

Acne vulgaris is a chronic dermatologic disease with four factors involved in the development of lesions. Treatments need to address as many of these underlying factors as possible in order to reduce acne lesions. As such, purified bee venom (PBV™ ) serum is an attractive therapeutic option for acne, but little data exist on the efficacy of this treatment strategy.

In this prospective, noncomparative study, 30 subjects having mild-to-moderate acne vulgaris were enrolled and treated with PBV™ serum twice daily for a period of 6 weeks. Clinical evaluation of lesions by expert visual grading and image analysis were made at weeks 0 (baseline), 3, and 6.

The average visual acne grade of all volunteers significantly improved with the PBV™ serum treatment at weeks 3 (P < 0.05) and 6 (P < 0.001) when compared with the baseline grade at week 0. In addition, there was a mean percent improvement of 8.6% and 52.3% in acne grade observed after 3 and 6 weeks of PBV™ serum use, with 20% and 77% of the subjects showing improvement, respectively, when compared with baseline. Moreover, the subjects showed improvement in open comedones, closed comedones, papules, pustules, and nodules after 3 and 6 weeks of PBV™ serum use.

Six weeks of treatment with PBV™ serum was found to be effective in the treatment of mild-to-moderate acne vulgaris, with no incidence of serious side effects or irritation.